As Lag B’omer approaches, anyone who has been fortunate enough to pour their hearts out to the Tanna Rebbe Shimon Bar Yochai recalls these sweet memories. The singing and dancing with other Jews from all walks of life until the wee hours of the night is an experience that bonds itself with the soul.

Why is Meron such a magical place, especially on Lag B’omer?

The Talmud teaches that during the time of Rabbi Akiva, 24,000 of his students died from a divinely sent plague during the counting of the Omer. The Talmud related that this plague happened because the students did not show proper respect towards one another; they were jealous of each other and competed to see who could reach the highest levels of spirituality by putting their friend down.  Miraculously on the 33rd day of the Omer this plague stopped. Rebbe Akiva was left with only 5 students, one being the Tanna Rebbe Shimon Bar Yochai.

The Holy Tanna Rabbi Shimon Bar Yochai (Rashbi) grew in his Torah learning to become a gigantic luminary for his generation and for all generations to come. Rashbi’s life spanned many important periods throughout our nation’s history. He saw the Holy Temple and its destruction while thousands of Jews were being led to their deaths by the Romans. He witnessed the destruction of Beitar and the cruel deaths of the Ten Martyrs.

As the Talmud recounts, Rebbe Shimon felt the Romans would soon come for him fearing for his life, he and his son fled to the caves of Tekoa. For twelve years they delved into the depths of Torah while surviving on the carob tree and water spring that Hashem miraculous provided for them. After 12 years, Elijah the Prophet came and stood at the entrance to the cave and said, “Who will notify Bar Yochai that the Caesar has died and the decree is nullified?” Upon hearing that, Rebbe Shimon and his son came out of the cave and started to return home. However, unable to handle the mundane world, they went back into their cave for another 12 months to ease their way back into the physical world.

On the 33rd day of the Omer, Rebbe Shimon left this world. The Zohar describes, he gathered his closest students together and shared with them the secrets of the Holy Torah. He told them that this day should be a day of rejoicing and celebration because “it is my day of joy”. The Zohar describes how as his bed was entering the cave floating on air with a pillar of fire in front, a Heavenly Voice called out, “Come and gather for the hillulah of Rebbe Shimon”.

The tradition of celebrating the hillulah has spanned thousands of generations. Rav Chaim Vital describes the Arizal visiting Meron on Lag B’omer. In the 15th Century thousands would travel from all over Asia and Africa to visit Meron on this holy day. Families came from as far as Damascus and Baghdad. 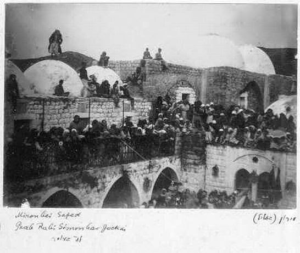 Bonfires were lit in honor of the Rashbi and people would dance and study Zohar the whole night. Later in history, The Ohr Hachaim Hakadosh got off his donkey and crawled up the mountain with his hands and feet to celebrate this holy day, and when he reached the top he was overcome with emotion and was very joyous on this special occasion. Today, hundreds of thousands of Jews flock to Meron for the largest Jewish gathering in the world, to unload their burden and daven for salvation. They dance together the whole night in celebration of this holy day.

Rav Aharon of Karlin says that all those who believe in Rebbe Shimon will be uplifted by Rebbe Shimon. Countless people have seen tremendous yeshuos either for children, marriage, livelihood, or health, because they have contributed to increasing the simcha of Lag B’omer in Meron.

The Ta’amei HaMinchagim says that numerous people have been helped by donating “Chai Rotel” for the seuda in Meron. Rotel is an ancient measurement and 18 rotel is roughly 54 liters of wine. The practice of donating money for food and drinks in Meron is supported by such luminaries like Rav Ovadia M’Bartenura and the Sheloh Hakadosh. Rabbi Yehudah Leib Horenstein, Tal LeYisroel, writes that he met two people on Lag B’omer in Meron that donated Chai Rotel and had children after more than 10 years of marriage. The Bobover Rav, The Kedushas Tzion, sent a letter from Poland to his Chassidim in Israel asking them to donate chai rotel in Meron on this holy day on behalf of a couple that did not have children.

Power of the Rashbi

The Sages explain that miracles were routine for Rebbe Shimon and the Talmud describes many stories about the miraculous wonders Rebbe Shimon performed even after he has left this world. The Arizal says, “On Lag B’omer the Tanna Rashbi stands at his holy resting place and blesses each and every person that comes to pray there and rejoice in his name on his holy Yartzeit.” 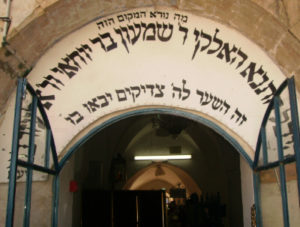 On the day Rebbe Shimon left this world, a fire was ignited that will never be extinguished. On each and every Lag B’omer, sparks fly from the fire to ignite the hearts and minds of all the Jews present, inspiring them to turn their lives back towards Hashem. It was non-other than Rebbe Shimon bar Yochai who proclaimed, “I can absolve this whole generation from judgment”.

Preparing for this Year

More than 430 years ago, the first Rashbi hachnassas orchim group was formed to prepare for the special day’s gigantic crowds. In 1998, Rabbi Yehoshua Biderman founded Yeshuos Rashbi to continue this tradition.

Yeshuos Rashbi has begun their preparations to accommodate the largest Jewish gathering in the world. The tents are already set up and our staff has spent sleepless nights preparing for thousands of visitors over Shabbos, Yeshuos Rashbi is getting ready to host the single largest Seudah Hilulah for Rebbe Shimon Bar Yochai on Motzei Shabbos in Meron. We are preparing hundreds of tables, thousands of chairs and over 15,000 portions- more than 1.5 tons of meat to accommodate the largest crowd ever. And of course, we have bought thousands of liters of drinks and hundreds of pounds of cake to give out as Chai Rotel.

Every year the crowds increase and more and more people travel to daven at the resting place of the holy Tanna. It is known that the kever of Rebbe Shimon bar Yochi is steeped in ancient majesty. Everyone who visits the site feels a strong spiritual stirring, an incredible longing to cleave to Hashem. The soul yearns to be with its Creator; a pathway opens and stretches directly toward Heaven. Even if you are thousands of miles away, now you too can have a part in creating joining in this.  Help Yeshuos Rashbi prepare for the largest Seudas Hilulah in Meron by generously donating Chai Rotel.  By increasing simcha on Lag B’omer, Hashem will surely increase the simcha in your life.