The Holy Tanna Rabbi Shimon Bar Yochai (Rashbi) grew in his Torah learning to become a gigantic luminary for his generation and for all generations to come. Rashbi’s life spanned many important periods throughout our nation’s history: he saw the Holy Temple and its destruction while thousands of Jews were being led to their deaths by the Romans. He witnessed the destruction of Beitar and the cruel deaths of the Ten Martyrs.

Rebbe Shimon felt the Romans would soon come for him, fearing for his life he and his son fled to the caves of Tekoa. For twelve years they delved into the depths of Torah while surviving on the miraculous Carob tree and water spring Hashem provided for them. Elijah the Prophet came and stood at the entrance to the cave, “Who will notify bar Yochai that the Caesar has died and the decree is nullified?”

Rebbe Shimon and his son came out of the cave and started to return home. Unable to handle the mundane world, they went back into their cave for another 12 months to ease their way back into the physical world.

On the day Rebbe Shimon left this world, he gathered his closest students together and shared with them the secrets of the Holy Torah. He told them that this day should be a day of rejoicing and celebration because it is my day of joy.The Zohar describes, as his bed was entering the cave floating on air with a pillar of fire in front, a Heavenly Voice called out, “Come and gather for the hillulah of Rebbe Shimon”.

Rebbe Shimon told them that this day should be a day of rejoicing and celebration because it is my day of joy. 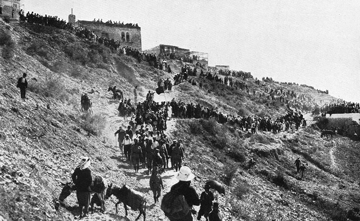 The tradition of celebrating the hillulah has spanned thousands of generations. Rav Chaim Vital describes the Arizal visiting Meron on Lag B’omer. In the 15th Century thousands would travel from all over Asia and Africa to visit Meron on this holy day.

Families came from Damascus and Baghdad. Bonfires were lit in honor of the Rashbi and people would dance and study Zohar the whole night.

Later in history, The Ohr Hachaim Hakadosh crawled up the mountain with his hands and feet crying the whole way up to celebrate this holy day, when he reached the top he was overcome with emotion and was very joyous on this special occasion.

Today, Hundreds of thousands of people from Rabbonim to simple people flock to Meron to partake in this special day. Rebbe Shimon is for all Jews and all walks of life.